What You Need to Know About Coronavirus

What You Need to Know About Coronavirus

Coronavirus continues to dominate the news as the epidemic spreads throughout China and the Centers for Disease Control and Prevention (CDC) has confirmed cases in the United States. The first diagnosis of this novel (new) coronavirus named 2019-nCoV was in Wuhan, Hubei Province, China, and many nations have put restrictions in place for travel to and from China.

The confirmed cases in the United States currently are limited to Washington, California, Arizona and Illinois; however, the CDC is investigating potential cases in several other states, so more confirmations may be forthcoming.

On January 30, 2020, the CDC confirmed the first person-to-person transmission of the new coronavirus, between a husband and wife in Illinois. Subsequently, the World Health Organization (WHO) has declared the new coronavirus an international public health emergency, only the sixth time it’s done so. The CDC currently advises travelers to avoid all nonessential travel to China.

Here’s what you need to know about the 2019 novel coronavirus.

1. The 2019 novel coronavirus spreads from person to person, though not necessarily through actual contact. The CDC continues to research exactly how 2019-nCoV spreads, but does say it spreads from person to person. At this time, that doesn’t necessarily mean actual contact. With the previous outbreaks of similar conditions MERS and SARS, it was believed those viruses spread person to person when an infected person coughed or sneezed and virus particles were transmitted to others, much like how influenza and other respiratory viruses spread.

2. Symptoms range from mild to severe. The common cold is also spread by a coronavirus. For some patients, coronavirus symptoms mimic those of a common cold, while others experience the same symptoms that accompany a severe respiratory infection. These include runny nose, fever, cough, sore throat, and shortness of breath. In some cases, the symptoms are so severe they require hospitalization and have resulted in death. Right now, the CDC believes symptoms can appear within two days or wait as long as 14 days after exposure.

3. Treatment options are limited to addressing the symptoms.
As research into 2019-nCoV continues, there is no specific antiviral treatment available or recommended to fight the virus at this time. Instead, patients infected with the virus should receive appropriate treatment to help relieve symptoms, as well as restrict any activity outside the home and avoid crowded areas in order to prevent transmission.

4. There is no vaccine for 2019-nCoV infection. Because there currently is no vaccine to protect against 2019-nCoV, the best prevention against the virus is to avoid exposure. In addition, to help prevent the spread of this and other viruses, the CDC recommends washing your hands often using soap and water for at least 20 seconds. Alcohol-based hand sanitizer can be used when soap and water are not available.

Also, always use a tissue to cover your cough or sneeze, and immediately discard the tissue. If you are sick, stay at home until you are well. Do not touch your eyes, nose and mouth with unwashed hands. Avoid close contact with anyone else who is sick, and keep washing your hands.

While many stores are selling out of protective face masks, the CDC does not recommend them for coronavirus prevention. Instead, officials emphasize hand washing as more effective protection from this and any other virus.

5. The source of 2019 novel coronavirus is linked to animals, but not confirmed as the cause. Because many patients in the Wuhan, China, outbreak were linked to a large seafood and animal market, it’s possible the virus originated in an animal source. However, that cannot be confirmed until the results of analysis of the virus’ genetic tree become available. Other coronavirus that originated from animals include SARS (civet cats) and MERS (camels).

6. Speak to your doctor if you recently traveled to Wuhan, China, or other affected areas. If you returned from Wuhan, China, or other affected areas, or you think you came in contact with someone who could be infected, do not wait for symptoms to appear. Call your healthcare provider right away, and he or she will coordinate with your local public health department and the CDC to see if you should be tested.

For the most recent information about 2019 novel coronavirus, check the CDC website for updates, including the number of confirmed cases and advice for travelers.

Posted on: February 14th, 2016 by Mindy Ruben No Comments

Read my latest blog entitled “The 4 Infections You Need To Be Aware Of…(And How To Treat Them) at MD.com.

Dr. Bruce Ruben, internationally known as “The Wound Doc,” is the Founder and Medical Director of Encompass HealthCare and Wound Medicine. Board certified in Internal Medicine, Infectious Disease, and Undersea and Hyperbaric Medicine, Ruben pioneered outpatient IV therapy. Follow him on Twitter at @EncompassCareMI and on his popular Facebook page at Encompass HealthCare & Wound Medicine.

The four types of microbes that cause illness in people are bacteria, fungi, viruses, and parasites. While these four one-celled or partially living agents have distinguishing differences that we will discuss below, it is important to note that all four types of infection cause similar symptoms when infection is present. Infection is characterized by inflammation, fever, chills, muscle aches, and joint aches. So, how does you distinguish one from the other? In addition, how does the physician or specialist treat each one of these infections? Let’s read more and learn.

Bacterial infections are the first of 4 infections that we will discuss. Bacteria are self-sustaining, respiratory, (breathing) one-cell life forms that live on, in and throughout the human body. Hundreds of thousands of specific types live homogenously on your skin, throughout the gastrointenstinal tract and in the urogenital tract. They live within our bodies for good reason: they protect us from illness and from some diseases, rarely causing any problems.

Sometimes, however, too much of a good thing can be bad. For example, bacteria that are under our armpit are good because they consume our sweat secretions, but bad because they produce volatile fatty acids that turn into gas. That gas smells and is what we call “Body Odor .” [1] This is simply a negative by-product of this bacteria, however what becomes a serious, medical concern is when these bacteria, that normally live outside of an organ like your skin, enters into and throughthe body, invading the space in which it should not live.

An example here is when you suffer a cut or a wound. The bacteria sitting on the pre-wound’s skin surface now can enter into your body and potentially cause infection. Not every skin breach causes infection, as we have all experienced. But in some cases, a wound that is not kept clean or a person with a compromised and weakened immune system can get ill. The symptoms are redness, hot to the touch, pain at site, and sometimes fever, chills, muscle aches, and an overall feeling of malaise.

In order to properly treat serious bacterial infections, you first must determine the type, depth and the severity of the infection. Your doctor typically will swab any drainage from the site and send it off for laboratory culture to identify the specific bacterial type. S/he then prescribes the correct antibiotic that will eradicate the bacteria, returning your body to a state of health. In some cases, the antibiotic will be delivered orally and in more serious cases, intravenously (through an I.V.). This type of antibiotic prescribing is the most prudent because the physician has specific information and can match the most useful antibiotic to the bacteria. Penicillin, tetracycline, sulfa, and ciprofloxin are typical antibiotics prescribed for bacterial infections.

The second type of infection is a fungal infection. Living in a similar manner to bacteria, we all have fungi that live in and on the body sites. Generally, they are not a problem unless one of two conditions is present: 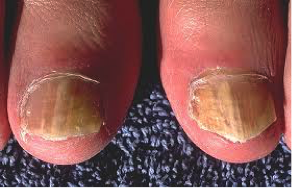 When kept in delicate balance, fungi do not cause illness. However, when out of balance, infection can occur. Someone who has AIDS, for example, might develop pneumonia because the fungi that live homeostatically inside

the lungs can overgrow, impair air exchange in the lung, and cause florid pneumonia. Because this person’s system is compromised, it is unable to maintain that healthy balance.

Recurrent sinus infections with bacteria or fungi are often the result of pendulous blocking polyps or allergy provoking mucosal swelling which block the normal sinus drainage into the stomach of infectious debris.

Again, treatment for these types of fungal infections must be cultured and then treated with the proper agent. Fluconizole and Nystatin are common antifungal medicines.

The third type of infection is a parasitic infection. This is where the parasite uses your body and is a life form itself. It can live on its own and/or “rent”space in your body. A common parasite is Giardia Lambia and it is usually found in fresh water systems such as lakes and rivers. Ingestion of infected water is the primary way this parasite infects humans. Over 50% of our lakes, river streams and creeks are infected with Girardia Lambia and it is even finding its way into urban areas’ drinking water.[2] This parasite is commonly found in the gastrointestinal tracts of deer and bears and it finds its way into the water through fecal contamination.

Giaradia Lambia parasite, a parasitic infection that can be treated at Encompass HealthCare and Wound Medicine, West Bloomfield, Michigan

Another example of a parasite is Malaria. Malaria is a disease caused by a parasite transmitted by infected mosquitoes. In 2013 an estimated 198 million cases of malaria occurred worldwide and 500,000 people died, mostly children in the African Region. [3]

Parasites are treated with anti-parasitics. Examples here are oral pills like Metronidazole (Flagyl), which is the most commonly used antibiotic for a giardia infection, and I.V. Quinine, which is one of several treatments available for Malaria.

The fourth type of infection is a virus. Viruses are different than all the others mentioned thus far because they require a life form in order to reproduce themselves. In essence, they use your body’s machinery in order to survive. Examples here include the common cold, Chicken Pox and Herpes. What is interesting about viruses is how they work: they take your own DNA and make template of your body’s cells. They then take that DNA template and form RNA viral genes. These genes use the cellular machinery to make hundreds of thousands of protein and carbohydrate capsules before inserting the RNA back in this shell and then breaking and killing the cell to move on to the next. This is how it grows and this is why it spreads. 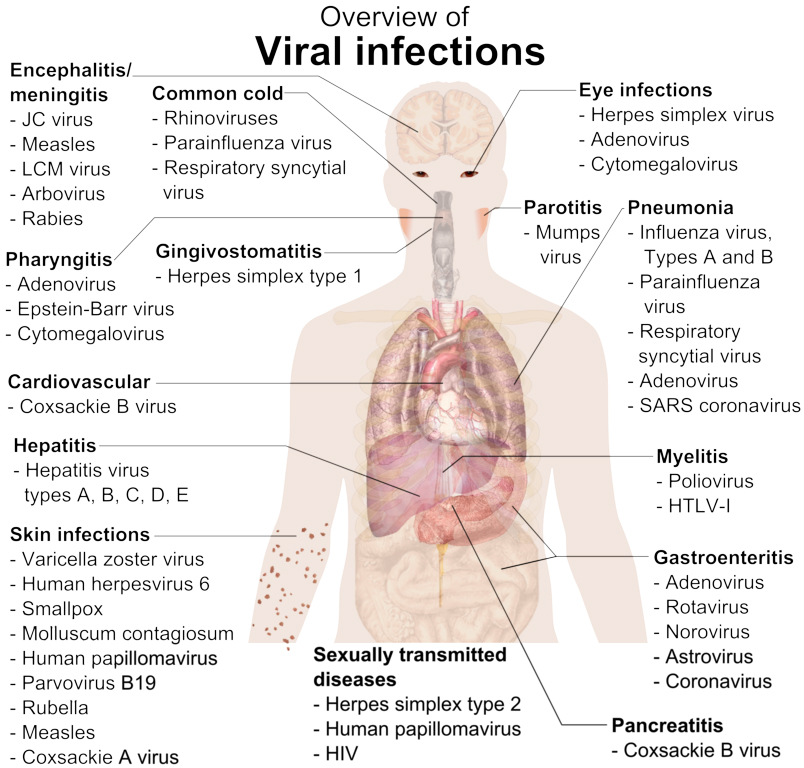 Treatments here are self-limiting, usually requiring nothing but fluids and rest in order to get better. Viruses do cause serious diseases, however, in humans such as AIDS, Influenza pneumonia, and Hepatitis. For these and others, antiviral agents are the remedy. Acyclovir and Oseltamivir are two common, antiviral medicines.

In short, infections of all kinds typically present in the same fashion with similar symptoms: fever, chills, muscle aches, and general malaise. It is only through thorough medical evaluation that one can determine the underlying problem and thus, its treatment. It is important that you have a good doctor who you trust and who has extensive experience. It is in this way that he or she can get rid of what’s bugging you.

[1] Cheryl Power, senior lecturer in microbiology at the University of Melbourne, Body and Soul.